The TETRAMIXCS type pipe reactors or tank reactors are a special design of TETRAMIX static mixers, where the mixing elements are placed in a pipe coil, sized for the task. Sizing means determining the number of mixing elements, their shape, L/D ratio, the layout and the length of the pipe housing, in order to ensure the necessary residence time with the continuous mixing required by the procedure.

These types of tube reactors have all the advantages and useful features of TETRAMIX static mixers.

The use of static mixing elements in so-called tube bundle heat exchangers is recommended when the typical flow pattern of the fluid in the heat transfer pipes is laminar or near laminar.

In such cases, TETRAMIX static mixing elements can be used to change the flow pattern in the pipe, typically from laminar to turbulent, thereby significantly increasing the heat transfer efficiency of heat exchangers with this design.

The intensification of the heat transfer is not related to whether the heat exchanger is direct-flow or counter-flow, and whether the equipment is new or old from an operational point of view.

Their dimensions are the same as those described in the pipe reactor. 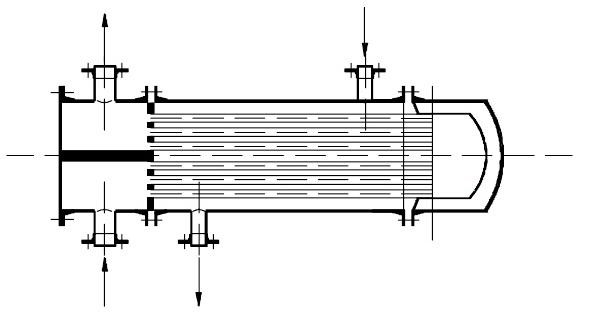 Static mixers of the TETRAMIXPK type are well suited for the separation of entrained liquid droplets of various gases.

Since liquid droplets transported by a gaseous medium cannot follow the rapid change of direction, the rotational motion, sooner or later they will separate as a result of collisions with the mixing elements.

The design, structure and connectivity of the device are shown in the assembly drawing above. In a plate droplet separator, the gaseous medium flowing through the tube is made to move in a "slalom" motion by baffle plates, thus separating the colliding droplets. The baffle plate assembly is held by bumpers at the end of the pipe housing to ensure that it is always in the same position when pushed back. A purpose-designed condensate drainage channel is installed along the bottom of the pipe housing to collect and drain the separated precipitated liquid.

In order to meet the technological goals, the inner plate part can be provided with cooling (heating) by means of a duplicated pipe design.