The TETRAMIX static mixer perfectly meets the general requirements for this type of equipment. Its versatility is also supported by other useful features such as:

TETRAMIX static mixing element before the formation of chemical streams and their mixing in transition zone (turbulent) flow.

The TETRAMIXC type static mixer is virtually identical to the standard TETRAMIX static mixer in all flow pattern characteristics, but offers additional benefits through the increased swirl chambers of the mixing elements.
One of the most useful functions is to smooth the intermittent flow of chemical nozzles, which are fed in stages in front of the mixer, making it continuous, with perfect mixing.

The TETRAMIXC mixing element is a modified version of the TETRAMIXCi mixing element, which, thanks to its curved geometry, further enhances the variability of the mixer design, essential for optimising the mixing task.

This variability allows the pressure loss during mixing to be adapted to the specific requirement.
Mixing formation showing maximum use of the enlarged vortex chamber:

The picture above is a good representation of the excellent operation of the special internal vortex chamber, which is able to mix the gas bubbles entering and floating up at one point immediately after the shredding and in the full cross-section.

The following snapshot is an example of liquid mixing:

The same mixing formation is achieved in gas-gas mixing, but with significantly more intense speed components and high Reynolds number and mixing efficiency.

This solution adds a number of innovative and useful features to the equipment, both during production and operational use ( e.g. the removability and cleanability of the mixing unit).

Droplet separationStatic mixers of the TETRAMIXPK type are well suited for the separation of trapped liquid droplets from various gases. Since the liquid droplets transported by the gaseous medium cannot follow the rapid change of direction, the rotational motion, sooner or later they will separate as a result of collisions with the mixing elements.

ETRAMIXPRThe TETRAMIXPR is a special version of the TETRAMIXPK static mixer, which is typically designed for mixing and homogenizing medium to high viscosity liquids. A very useful feature of slotted mixing element plates is that the fluid flowing through them, in addition to the multiple splitting, is forced to undergo a kind of rotation, elemental volume exchange.
With this combination of motions a very effective mixing can be achieved when performing the type of tasks where the flow pattern of the mixture in the pipeline has the characteristics of purely laminar flows.

Mixing formations that can be achieved
TETRAMIXPK

The Turbomix family of mixers is designed for mixing identical or different fluids, in particular gases with liquids and liquids with liquids. 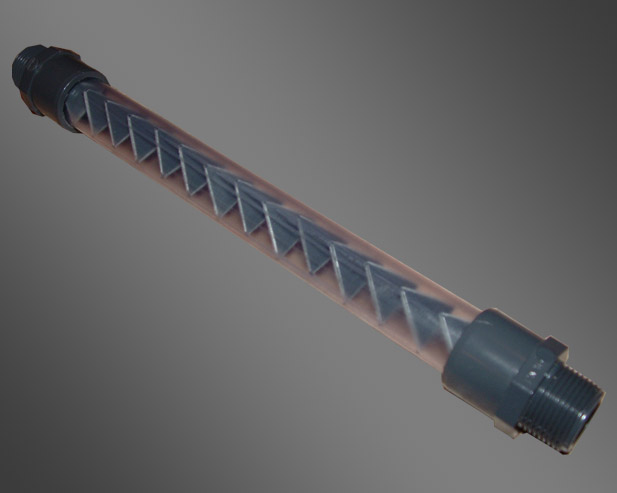 We have added to our product range a 2 in 1, i.e. two-in-one, static mixer with a transparent PVC pipe housing, which can perform two tasks simultaneously during installation and application, namely